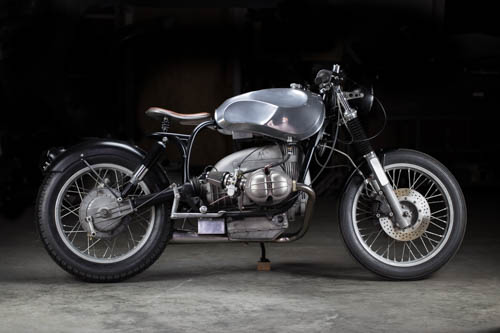 After building Biplano and  Manta we wanted to leave the cafe racer theme behind us and try something different in terms of lines but also something which incorporated more of our metalworking skills.The first draft was done in a pub in Deptford however it doesn’t have anything to do with what we made…we are still wondering why….but we are very pleased with the result regardless.

We bought a standard trim R80 donor from Ebay, mechanically was sound but the bodywork was really poor…anyway, no much guilt in chopping it up!We can say that we design the bike after we built the tank.We wanted something different from the usual alloy tanks lines.Although we had some experience with fibreglass which came helpful during the tank mods in mAnta, we wanted to focus on making a complete alloy tank in the house.The makeup was made using polyester refined with plaster of paris then, after tempting it, we cut the components from alloy sheet and we shaped them with our english wheel.After the big welding a lot of time was spent refining the overall design knowing that we had no intention of go down the “filler and paint” route, we wanted to leave the tank bare and honest!Same philosophy was applied to the seat unit with is made with stainless steel and the other custom made components. 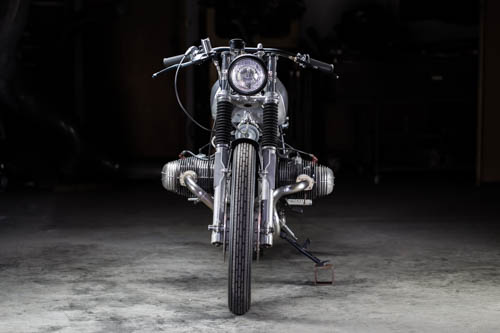 We wanted to have a raw feel with the finishes but at the same time we didn’t want to compromise and leave untouched parts which didn’t appeal to our eye.Because of that, we machined in the  house footrest, master cylinder, rear mudguard, all the brackets, exhaust two into one system, silencer ,subframe and a variety of other components including a series of stainless conduits bent around the frame to accomodate all the wiring and keep the look minimal.
The full wiring system went into the bin and we fitted a Motogadget control unit and switchgear.The engine is a 800cc lump which benefits from two new Mikunis round slides and, due to the amount of weight we removed from the bike, it gives a lively ride!
Next project is a BMW r100 which we bought recently which we are aiming to do up with a full alloy bodywork including a fairing…
BTW We will put Scintilla for sale soon in order to sponsor the next built…before I will enjoy it for a few weeks!

The front end is front a BMW K75 with 41mm stanchions and braking system.

Both, front and rear rims have been reduced 1″ in diameter improving the handling and they are fitted with stainless spokes. 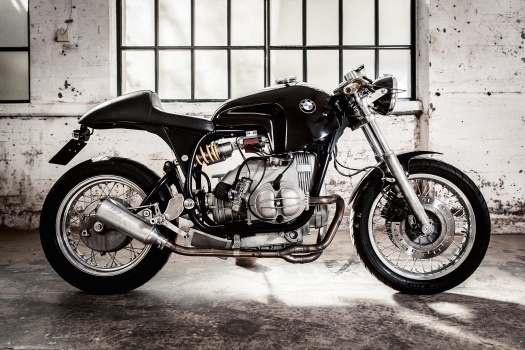 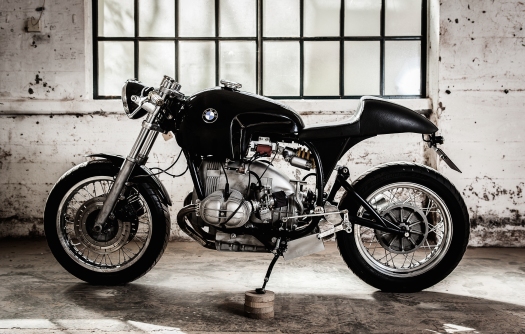 The rear swing arm has been braced and hosts a fully adjustable Showa shock absorber which is connected to the main central frame member.

The sub-frame is bespoke made and welded to the main frame.

The tank is a “cut down” Heinrich endurance tank which I rebuild in fiberglass and then I had professionally sealed.

Simon and Andrea have made the two into one stainless  exhaust system which terminates with a Supertrapp muffler. Billet alloy rear sets.

The full engine has been fully rebuilt and dynamically balanced.  With new pistons and barrels by Siebenrock, ported heads and an electronic ignition conversion with double plugging. 40mm Dellorto’s and rebuilt gearbox.

We could have changed a couple of bearings and seals and describe the engine as refurbished but Andrea really wanted a zero miles unit and wanted it done at the top quality hence the engine works were subcontracted to Jim Cray Engineering (if you like BMW you should know this guy,he is a legend!) 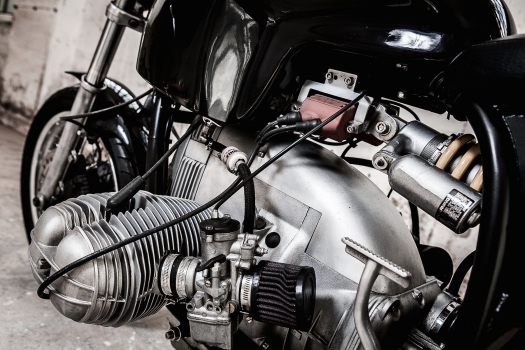 Andrea’s first BMW custom Biplano was based on a 1978 BMW R80/7
The idea was to strip down to the bare the bike and create a raw cafe racer styled one.
A second disk and a custom made billet top yoke was added to the front end.
All the instruments were removed and a polished aluminum petrol tank based on a Moto Guzzi racer was fitted.  Andrea manufactured the fiberglass seat unit and altered/removed mudguards and other bits.
Biplano’s engine had the heads refurbished and double plugged.  The barrels were updated to the Nickasil plated version.
Overall the mods were not as full on as the ones used for Sette Nero Manta however the final result was a rather “straight to the point” cafe racer!

Thank you to the fabulous Nick Caro Photography for the shots!